Conversion of sewage gas into electricity in South Africa

Overall, the framework conditions in South Africa for the generation of electricity from sewage gas are rather difficult. The remuneration for feed-in from renewable energies is fixed at auctions, this procedure prefers scalable technologies such as photovoltaics. Biogas, on the other hand, is limited by the availability of raw materials. This restriction applies in particular to the conversion of sewage and landfill gases into electricity. The unique selling point of biogas, simple storage and power generation at peak times, is also not affected by this process of auctioning.

Thus, the only economically decisive factor on the South African energy market is the savings in own electricity consumption. The current electricity prices of around 1.20 rand/kWh (around 0.08 €/kWh) are low by German standards. However, the electricity price has multiplied since 2007: at that time, it was 0.013 €/kWh. In addition, annual price increases of 10% have been announced.

In this field of tension AKUT was commissioned by the Deutschen Gesellschaft für Internationale Zusammenarbeit (GIZ) GmbH to prepare two studies on the use of sewage gas for the two sewage treatment plants Kingstonvalle and Zeekoegat.

Against the current background of water scarcity in Cape Town, the relevance and explosive nature of the topic becomes very clear. The lack of rainfall is primarily attributed to climate change. The studies therefore identify emission reductions, in this case reductions in methane emissions, as a significant advantage in addition to economic advantages. At present, the gas produced by sewage sludge digestion is released into the atmosphere without further measures. This is now to be changed so that the gas is collected, processed and used for power generation.

The studies present detailed comparisons of various technical components, operating models and organisational forms. In both sewage treatment plants, the economic benefit can be maximised by optimising the utilisation of the existing digestion towers. Capacity utilisation is to be increased by adding so-called co-substrates, either digested sludge from neighbouring sewage treatment plants or waste from the agricultural industry. The latter could be identified by local AKUT employees so that specific modelling could be carried out, taking into account both the biogas potential and transport costs.

Economically reasonable are also the variants with an exclusive treatment of the sewage sludge of the sewage treatment plant. However, the then lower investments will lead to a slight reduction in profitability.

In addition to the technical components and the various operational management, operator models from in-house operation to BOT models were also examined. Two preference variants were determined from six different operator models.

The decision now lies in the field of politics. Should the measures be implemented? Which of the preferred variants is preferred? GIZ and AKUT are ready to continue to support the City of Tshwane and Mbombela municipalities – both in decision-making and in technical implementation. 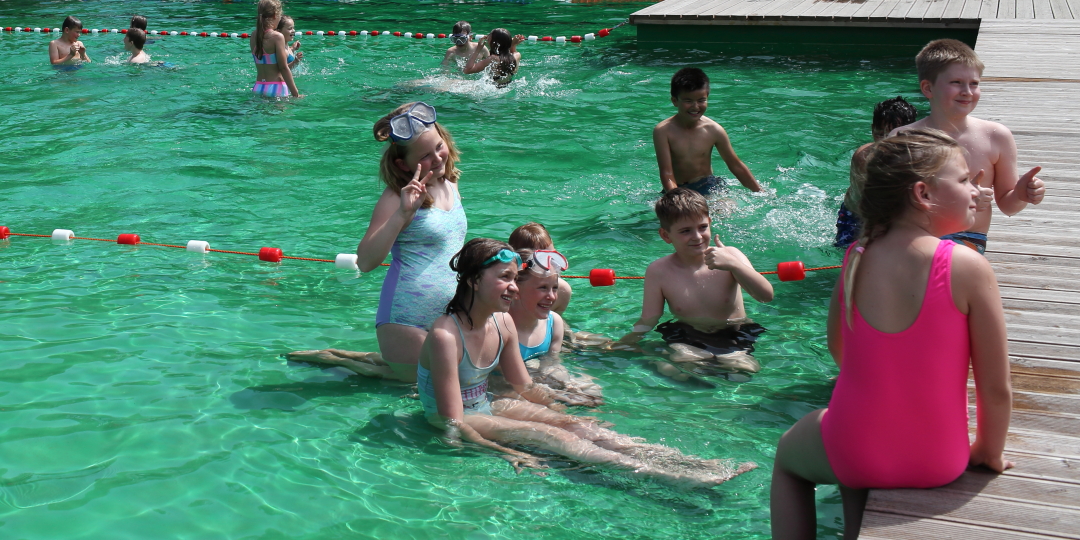 In bright weather, on the first day of loosening the Covid-19 lockdown in Brandenburg, Mayor Karl Tedsen and District Director Dieter Fuchs together with Katrin Covic, head of the citizens association Aktives Neustadt, opened the newly designed outdoor swimming pool in Neustadt an der Dosse on June 3, 2021. For nine years, citizens had to wait for the renovation of the old dilapidated swimming pool. Today, a biological filter replaces the water treatment that used to be operated with chlorine chemistry.

During the fundamental renovation, a diving facility with a 1-meter board and 3-meter tower was added to the pool. This resulted in an elaborate extension and redesign of the old concrete pool. The lining of the approximately 540 square meter pool with a high-quality PVC-free foil as well as the access via a natural wooden walkway now convey a warm and natural impression. The shallow access via the non-swimmer area is based on natural shallow banks, is barrier-free and invites the little ones to splash around.

The biological water treatment system consists of a simple soil filter located away from the bathing area. The substrate provides a large surface area for microorganisms to grow. Their task here is to break down organic pollutants, which can be carried in by bathers but also by the adjacent vegetation or birds. The advantages of this natural process lie in its adaptive properties and the avoidance of chlorine-organic compounds that would otherwise be produced during chlorination.  This means that the biofilm grows with its tasks: if the food supply in the biofilter increases, the biomass grows and increases the purification capacity. However, natural systems are comparatively sluggish, so a training period is required.

The focus of natural bathing water treatment is on the reduction of germs and phosphate. While undesirable bacteria are preyed by the protozoa on the biofilm, phosphorus can only be adsorptively bound to the filter material. For this purpose, the biofilter was supplemented by a regenerable phosphate filter, because the more phosphate is bound there, the clearer the water in the bathing pond remains.

With this solution, the city of Neustadt (Dosse) opted for a cautious renovation of the public swimming pool, taking into account the existing building fabric. The regional planning offices s quadrat m, freelance architects Sylvia Markau and Steffen Michaelis from Kyritz and VORLAND, landscape and open space planning Susanne Geitz from Wulkow were entrusted with this task in conjunction with the specialist planning office for ecological water treatment AKUT Umweltschutz Ingenieure Burkard und Partner, Heribert Rustige. 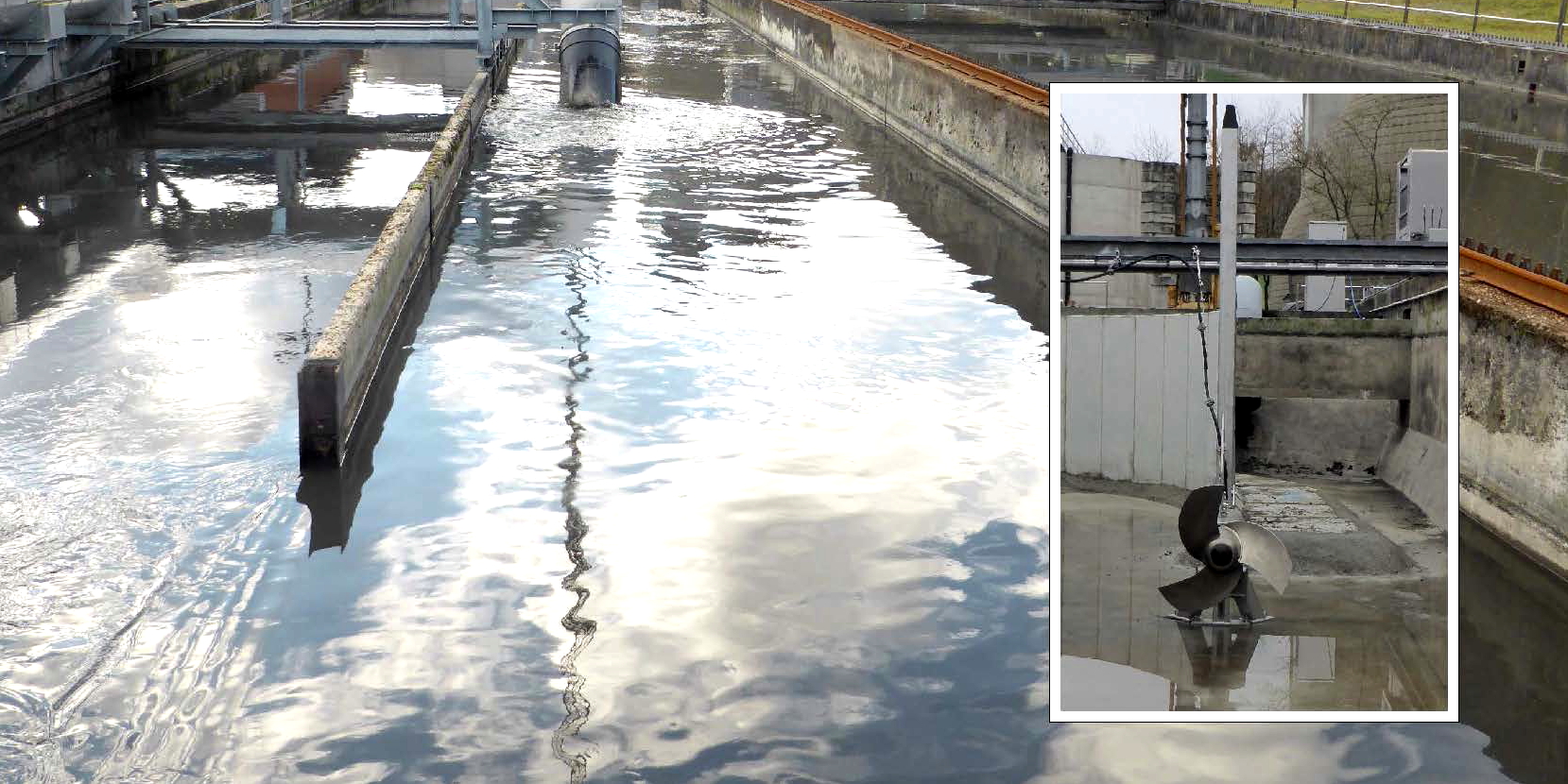 The Abwasserverband Saale-Lauer, operator of the wastewater treatment plant built in the late 1970s (city of Bad Neustadt an der Saale, Lower Franconia), is optimizing the wastewater treatment plant and adapting it to the stricter environmental requirements. Priority has been also given to the stability of the cleaning performance and energy efficiency.

AKUT was commissioned in 2018 to identify expansion and optimization options for the wastewater treatment plant. Several modules were developed, of which the fluidic optimization of the denitrification basin was practically and successfully completed at the end of 2020.

Among other measures, the inlet and the circulation of the denitrification stage had to be hydraulically optimized. In the medium term, an expansion of the treatment plant is also planned, which is increasingly reaching its loading limits. Reconstructions from previous years were subjected to a weak-point analysis, which aimed at stabilizing the effluent quality and achieving a more energy-efficient operation.

The denitrification stage was found to operate below optimum cleaning performance.  The cause was identified as inadequate hydraulics in the inlet area. Furthermore, sludge accumulation occurred in the basin due to unfavourable flow guidance and non-optimal agitators.

In 2020, the closure of the old distribution channel and the adaptation of the threshold structures were implemented in accordance with the hydraulic calculation carried out by AKUT, so that the entire water flow and the entire return sludge is now routed through the denitrification stage.

In order to improve the circulation behaviour of the wastewater and to avoid the previously observed sludge deposits on the basin bottom in the future, concrete elements calculated and manufactured for the application were embedded in the longitudinally divided structure and the existing corners in the basin were optimally designed.

The newly installed, slow-running propeller agitator, the thrust of which is adapted to the different recirculation and sludge return feeds as required, results in energy savings of 50% compared with the previous agitators. 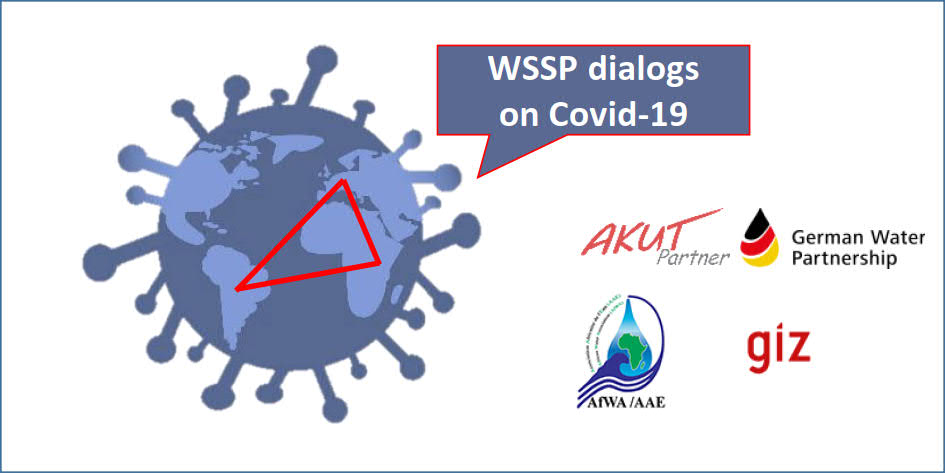 Since the spread of Covid-19 worldwide it has become one of the few certainties that meeting hygienic standards is one of the most effective forms of prevention. Thus, for users of water and sanitation services, the continuity of water supply becomes more than ever a major public health issue. But the pandemic puts Water Supply and Sanitation Providers (WSSPs) at risk and challenges.

AKUT has a vast experience in international cooperation in Latin America, where it has worked on projects in cooperation with GIZ (Deutsche Gesellschaft für Internationale Zusammenarbeit)  consulting for WSSPs. Recently, AKUT has opened a new office in Kampala, Uganda, where it is expanding its activity also in Africa. Therefore, AKUT decided to support the WSSPs in this challenge of the Covid-19 pandemic.

Our initiative of knowledge exchange through Webinars in response to the pandemic for WSSPs has already been carried out in Brazil, Peru and Bolivia. These webinars are part of the ongoing GIZ activities. AKUTs Latin American experiences have inspired our Kampala office. The African continent has been able to benefit from these webinars too thanks to the cooperation between GWP (German Water Partnership), AfWA (African Water Association) and BMZ (Bundesministerium für wirtschaftliche Zusammenarbeit und Entwicklung).

The webinars aim to present concrete measures and good practices in the face of the Covid-19 pandemic in a practical way. Speakers from WSSPs present their practical experience and through the final question and answer session a beneficial exchange of knowledge is achieved between all participants of the webinar. Some sessions have had simultaneous translation on two channels for the presentations of foreigners. The sessions are recorded and participants receive a draft pandemic response plan document along with the presentations made so that knowledge and lessons learned can be disseminated.

Our initiative has brought the necessary tools for WSSPs to respond effectively to the pandemic, protecting their employees and ensuring the continuity of their services. The success of these webinars is a result from  close cooperation between all parties in the sector. We hope that the high level of motivation and cooperation shown will lead to a rapid response in the water and sanitation sector to the challenge of the pandemic globally.

For further information on Webinars and support in this matter contact: Romas Radtke.